Coronavirus (COVID-19)
In line with government instructions the Fisher Theatre is currently closed.
We still have no idea when restrictions on Theatres and Cinemas will be relaxed and what distancing measures will be required of us when we do open to ensure the safety of staff, volunteers and you, our audience.
Sadly this uncertainty makes it impossible to advertise any shows at the moment.
Many small and large Theatres are suffering as we still have running costs to pay with no income. If you are able to make a donation to help us come through this crisis please use the 'Donation' link in the sidebar.
Thank you for your support of the Fisher Theatre and your understanding at this difficult time. 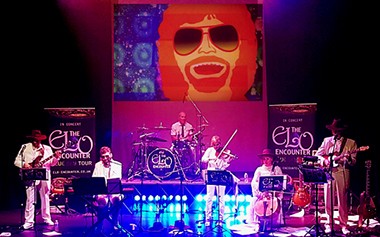 ELO, it’s a spectacular live show from start to finish. Stunning lights and special effects create an atmosphere that will have you fully immersed in the whole experience. As the ELO Encounter reel off ELO classic hit after hit, it’s guaranteed to have the hairs on the back of your neck dancing in time to the music!!

There is quite the back catalogue for the band to delve into, and revellers will hear classic hits like Evil Woman, Telephone Line, Don’t Bring Me Down and of course Mr Blue Sky.

Each band member is an accomplished musician in their own right, with members having played alongside the original ELO drummer Bev Bevan no less, but they all share a love for ELO and dedicate themselves to accurately representing the band on stage.

And The ELO Encounter are bringing a slice of that magic to the theatre stages across the UK as part of their Blue Skies Tour.