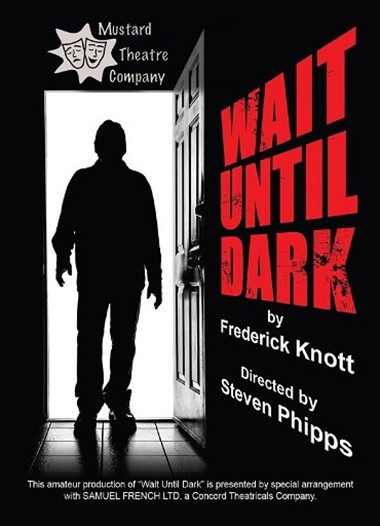 A sinister conman and two ex-convicts are about to meet their match. They have traced the location of a mysterious doll to the home of Sam Henderson and his blind wife Susy and set about trying to retrieve it. They start an elaborate scam to persuade Susy to hand it over, but Susy, it seems, is no easy target. Wait Until Dark.

This is a psychological thriller made into film starring Audrey Hepburn in 1967. A rarely performed play from the author of Dial M for Murder and Rope. Interesting/complex set design as the play is set in a basement flat with the associated stairs being much used as theatrical device.

A sinister conman looking for a mysterious doll, visits the apartment of Sam Henderson and his blind wife, Susy. With Sam potentially implicated in a recent murder, Susy realises the doll could be the key to his innocence and refuses to reveal its location. A deadly game of cat and mouse then ensues between the two of them and Susy knows the only way to play fair is by her rules, so when darkness falls she turns off all the lights leaving both of them to manoeuvre in the dark until the deadly game is over.